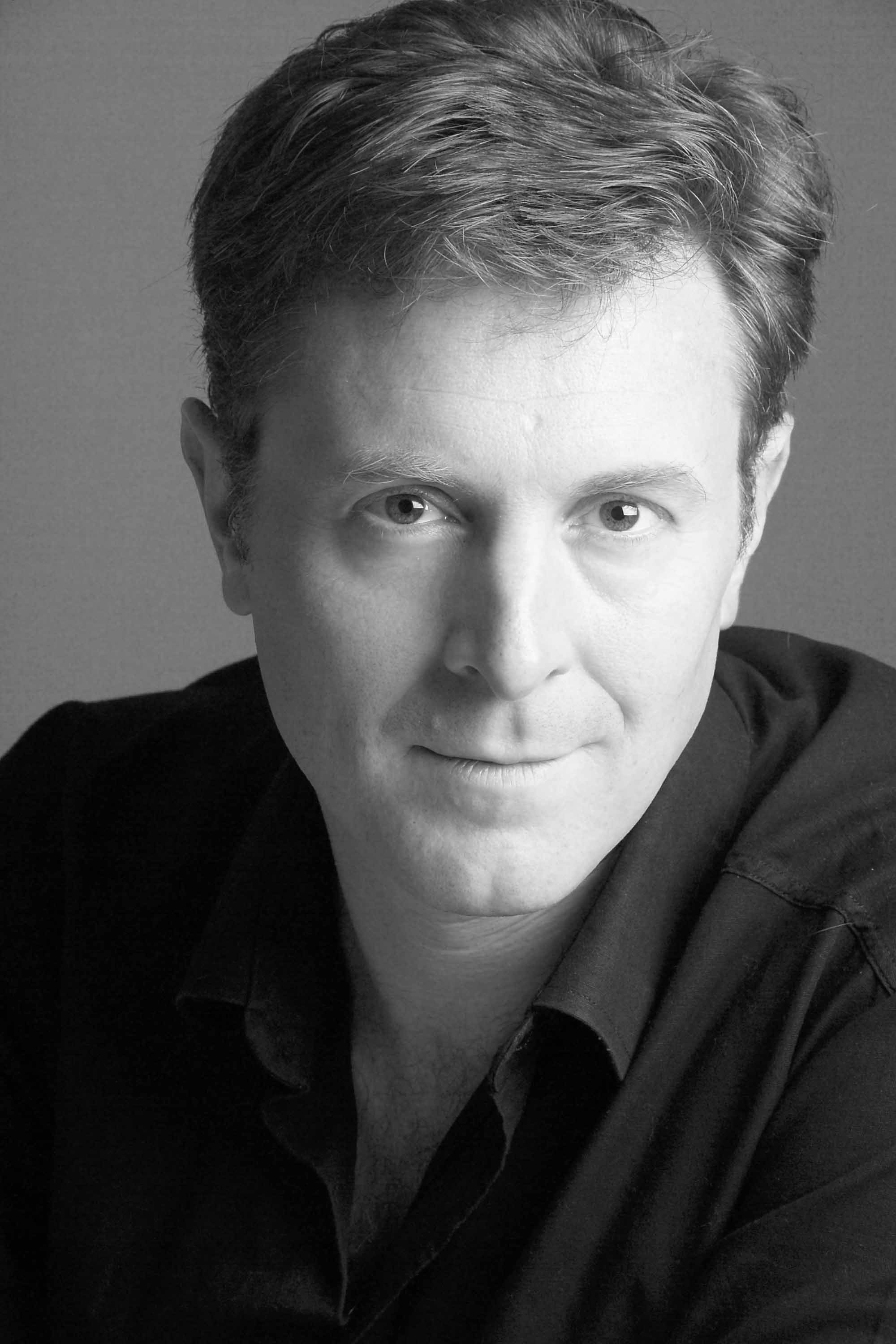 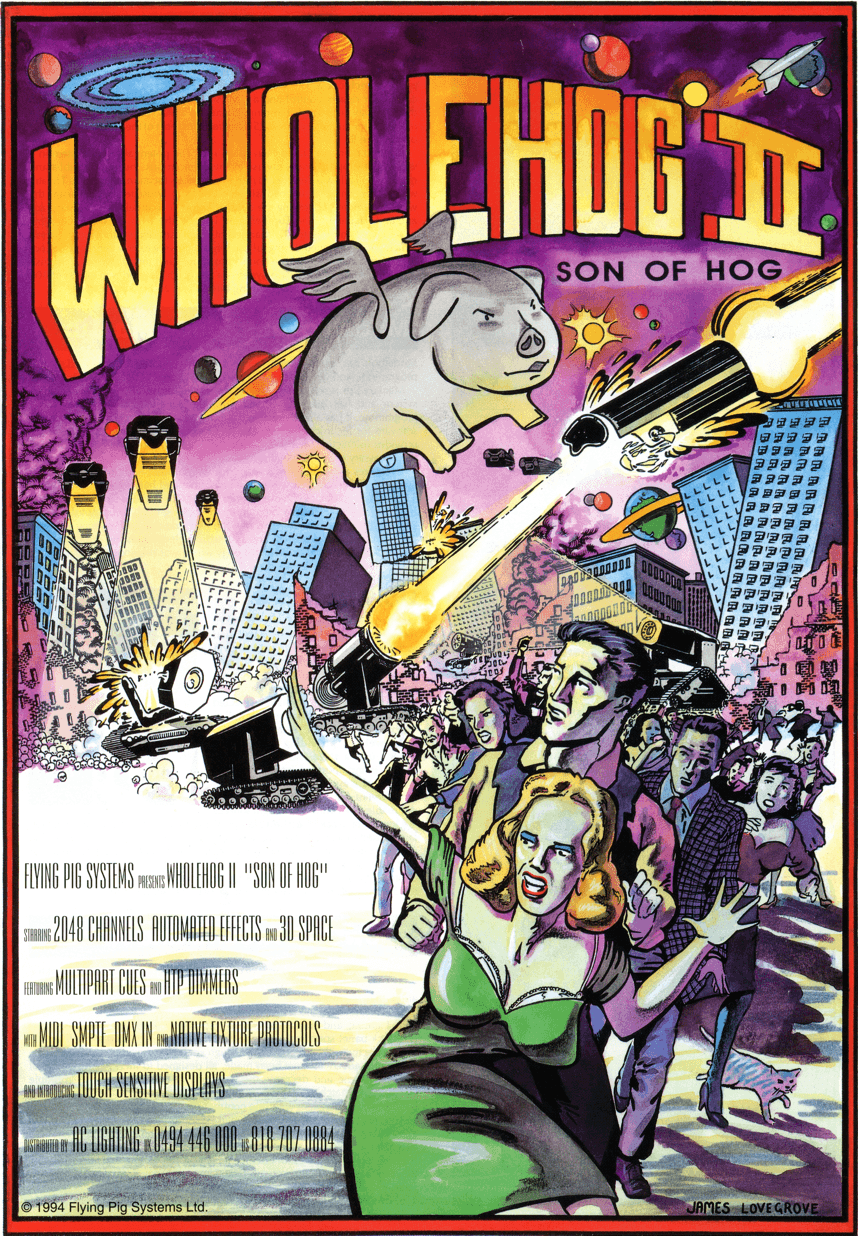 James Lovegrove, now a successful author with more than 50 novels to his name, was the artist behind the iconic Flying Pig Systems logo, the Wholehog II logo and the Wholehog II ‘Son of Hog’ movie poster advertisement.

In fact, not only was that advertisement drawn by James, it was coloured by the man who would one day be the conceptual artist for all the Harry Potter films. It’s fitting for the story of Flying Pig Systems that the level of genius runs so deep: never in the annals of the show lighting industry has so much artistic talent gone in to the creation of a full-page ad. Not even a Vari-Lite one . . .

Why were you approached to design the Flying Pig Systems logo?

I was at school with Nick from 13 onwards. I was always drawing stuff and writing stuff. For our band, Masque, I would draw all the sleeves for our demo cassettes. I was mostly self-taught. I was – still am – a big fan of comics and I taught myself to draw by copying Marvel comics from the 70s. And I just loved using Letraset and Letratone, which of course is an alien thing these days. Nobody would understand rubbing out a letter at a time to try to make a design!

So Nick knew I was an artist, and they asked me, over time, to do bits for them here and there – the Pig logo, and the poster, which was probably the last big piece of artwork I ever did, because after that I didn’t think I could go anywhere! They were just fun commissions, and I loved doing them.

Did you do the Wholehog II logo, in that kind of ‘Cinemascope’ style?

Yes, absolutely – and I did that practically freehand . . . I’d said to them, you have to do real maths to work that out properly, but Nils just said ‘No, do it freehand, do it as best you can and it’ll be fine’. And it was – it turned out really well.

I got paid a one-off fee. In hindsight, I should have gone for a royalty! But I was happy to do it for them. I loved doing it. I used to draw cartoons for Nick as well – he would offer me commissions just for fun. He’d say ‘I want to see a priest impaled on a crucifix’, and I’d say, OK, no problem – here you go!

How did you draw them? Pen and ink?

Yes, pen and ink. The thing is, I can really only draw in pen and ink. I’d do a pencil layout, and then go over it with Rotring pens or felt tips. I never used a brush because I just don’t have that fine hand control. And the other thing is, I couldn’t really do colours. So for the poster I went to a friend of mine, Adam Brockbank, who is not only a comic book artist but works in movies in design and storyboarding – he is brilliant. I said, ‘This is supposed to look like an American movie poster from the 1950s, so just make it lurid, just go for it’. I could never have done that – he did such a brilliant job.

Are the original artworks still in existence?

If they are still in existence, I don’t have them. They would have been A4 or A3 pieces of Bristol board and I would have just handed them over to Nils and said ‘Here you go’!

Did you closely follow the success of the company?

In a weird way, I did and I didn’t. I knew Nick so well and saw him so often but I didn’t really have an idea of what his work or the business was like. I was sort of conscious that it was doing well, but it was still just three of my mates arsing around in an office somewhere.

When our two sons were quite young we took them to see a show in Brighton, and as were walking past the lighting desk, which was just inside the auditorium, I saw there was a Pig desk there. I pointed it out to my sons and said ‘I drew that logo’ – and they were so unimpressed!

What else do you remember of Flying Pig Systems in those days?

I did like their work ethic. I’d go to their office sometimes and from Friday lunchtime onwards, everyone just downed tools and they popped champagne and networked Doom or Duke Nukem on their computers and just played that for the rest of the afternoon. I thought that was quite a healthy approach, because nobody does any work on a Friday afternoon anyway. Why not just embrace it?

Later when I heard that they were selling the company and that it was quite a big deal, I was very happy for them. It just seemed like they’d done a great thing.