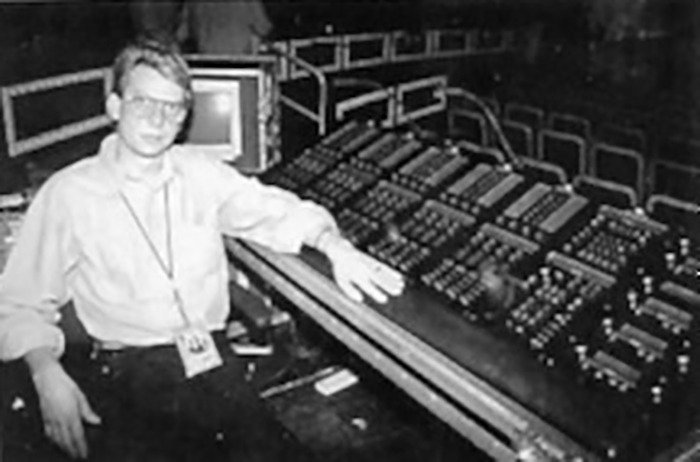 Around 1993, Sting’s management did not want to have myself and a Vari-Lite operator on the road, and that coincided with the Hog 1 being built.

I was able to go on the road with one board that did it all, with me operating, so that was the answer the management wanted at that time.

I learnt to use it as I was designing and programming Sting’s 1993 Ten Summoners Tales Tour at Patrick Woodroffe’s 4:1 studio in London. I then took the Hog 1 on its first world tour with Sting.

I could appreciate straight away that this was ideal. One desk controlled all. You young guys have to remember that us mortals were only just getting our first computers, so getting our heads around operating this desk was a very steep learning curve. But like all these things, after being thrown in at the deep end, you either sink or swim.

Which firm supplied it?

It made the show lighting replay deadly accurate. Whatever you programme is how it replays. So now we had to battle with management to get time to programme a proper show, not just a wing and a prayer.

Very hard to wing a show, but that has a lot to do with the advent of moving lights.

When you unpacked it at each venue you knew it would work. And the photo of my son Matthew operating the Hog 1, aged 3. He is now 30 and married – where does the time go?

On the Hog 1’s first tour of the USA (Sting, 1993) I would have LDs come to our shows around 3.00pm to have a look at this wonder board. Dave Davidian, Jonathan Smeeton, Jeff Ravitz etc would come along, either having been contacted by the Hog boys, or through the jungle telephone. I remember being very proud at having the first board out and teaching the concept of the desk to my peers. I was very happy to help. Maybe I should send the Pigs a bill?

I designed a one-off Sting show in Athens. My crew and I were there all night programming at the outdoor amphitheatre next to the Acropolis. As we finished, as the sun was coming up, my programmer saved the show to a stupidly long title and lost the whole show. It took Beaky and co three months to find out why it dumped.