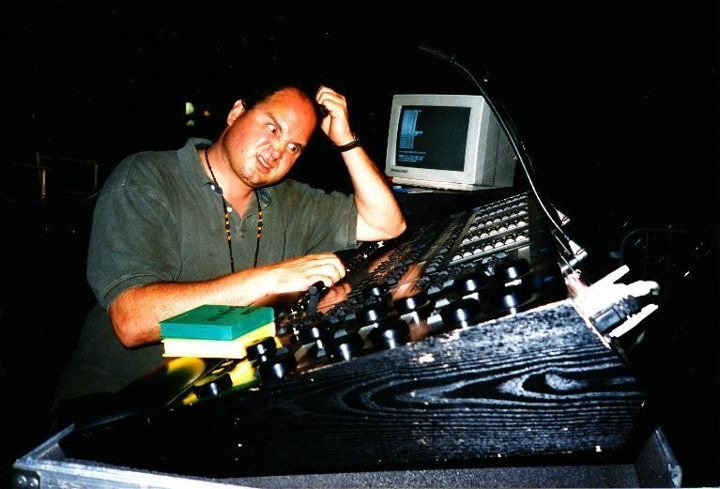 I walked into the Meteorlites shop in London in late 1992 and saw this console sitting there and said “What the hell is this thing?” I was about to go out on a Lenny Kravitz tour with a bunch of old Intellabeam controllers. They told me they bought it for Sting, but nobody knew how to run it.

Which company supplied it?

It was the first console to give me control of every light I used – at my fingertips. It had lots of faders and executor buttons.

I could run every light but a Vari*Lite from this desk originally. It allowed me to stick my middle finger up at a bunch of Texans who thought they owned the moving light world at the time.

They hadn’t invented the ‘Go when off 0’ option back then, so I had to activate each cue with my index finger and bring up a fader with my thumb at the same time.

But the absolute worst was the hard drive locking up whenever the bass got too heavy. I opened this big rack for the first time to investigate and found a small 386 computer and a small hard drive held in place by some shoddy foam and tie wraps. You had to laugh to keep from crying when you saw that for the first time.

We got the first [High End Systems] Cyberlights in 1994 for a Phil Collins tour. The Cybers didn’t run off DMX at the time, so the Flying Pig guys had to invent these boxes that turned the DMX from the console into the HES protocol signal that the lights could understand. Something never worked right and for the first leg of the tour the Cybers would only pan 90° and tilt 45° – half of their intended range. But Patrick Woodroffe insisted we keep them in the show. There was a lot of finger-pointing going on between all parties at the time. The problem was never with FPS it seemed, as we updated the software to the fixtures on the next leg and it all worked well. We still needed an Artisan to control the VLs on that tour.”

Walking into every venue and having people come up to me and say, ‘What the hell is this thing?’

Having Robert Plant come out to my console and press buttons to change color on songs during a Lenny Kravitz show. It was literally a case of ‘What does this one do?’ and he would press it before I could answer. But he did it on time, so it was good fun.

Upstaging called me into their office one day about ten years ago and said that HES wanted to purchase the old Hog 1 console I had used on tours. They wanted me to see if it still worked after ten years of storage. I fired it up and saw that it had two fixtures in the library, a Studio Color and a Cyberlight. The console did work. It took me ten minutes to remember how to write a cue.

The one thing that bothered me the most when they transitioned to the Hog 2 was that I lost all those encoder nobs. I really liked them. The Quadrant fader – and the big-ass monitors we had back then – not so much.